Our research in the Florida Everglades addresses the spatial patterning of distinct vegetation communities and their feedbacks on microtopography.  The ridge-slough mosaic is a central feature of the Everglades, but has degraded in response to hydrologic modification, nutrient enrichment, and other environmental drivers.  Because the heterogeneity of this system is important to birds, fish and other consumers, preserving the structure of the landscape is the foundation of other Everglades restoration goals.

Our group and several others are working to understand 1) what processes create the differences in elevation between ridges and sloughs, and 2) why these patches are arranged in the linear, flow-parallel pattern that we observe.  There is almost universal agreement that differences in soil elevation reflect the balance of plant production and soil decomposition between ridges and sloughs.  What remains controversial is the patterning mechanism.  One hypothesis is that sediment redistribution creates these patterns during extreme high flows. Another hypothesis is that nutrients accumulate in ridges, and are slowly transported downstream, creating elongate ridges.  A third hypothesis is that ridges can not grow wider because doing so would constrict flow and cause greater water depths, which is bad for sawgrass (the dominant plant on ridges).  This latter hypothesis is the one our group has developed and is working most actively on, but that doesn't make it right (necessarily).  Because these hypotheses have very different implications for how water is managed in the Everglades, we are hoping to work with other research groups to determine which mechanism (or combination of mechanisms) is most important. 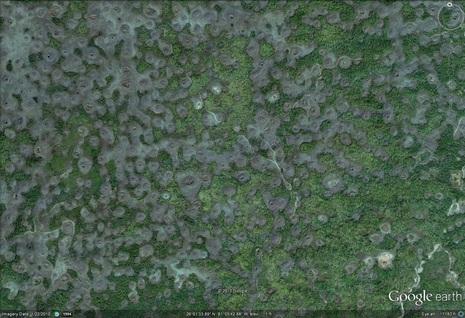 Recently, we have begun work in Big Cypress National Preserve, which is a part of the Greater Everglades landscape.  (Update: We just got funded by NSF to do this work!) Unlike the Ridge and Slough, which is a peat system, Big Cypress is built directly on (and in) a limestone substrate.  Big Cypress gets its name from the characteristic 'domes' that the cypress canopies form.  Interestingly, the height of the canopy seems to mirror the depth of the soil, which is deeper where the trees are taller.  Moreover, these domes appear to be regularly (as opposed to randomly) distributed in space, and have a characteristic size.   Our main working hypothesis is that these domes form as organic matter from tree leaf litter and roots dissolves the limestone, creating deeper soil and more drainage toward the dome.   At some point, the contributing areas of different domes come into contact with one another, so they can't get more water, and they can't grow further.  But this is very much a work in progress.  We'll let you know as we learn more.